NFL Star Avoids Retirement And Hangs Onto A Glorious Past 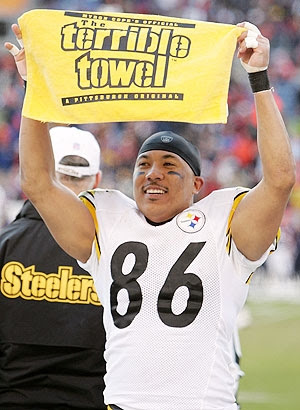 Subjugating admission to an ego that athletic abilities have waned is tough for many professional athletes. Especially when the person is under 40 years old and feels years of acquired knowledge have made them more valuable than ever before.

Hines Ward recently told reporters that he has no plans to retire and wants to play with the Pittsburgh Steelers next season. Having spent all of his career with Pittsburgh, the 14-year veteran told reporters he is willing to take a reduction in pay off his 2011 salary of $4 million.

Ward says he will be "devastated" if he cannot finish his career with the only professional team he has played for, but Pittsburgh will have to decide in a few months if they want to give the wide receiver a roster bonus in order to give him a chance to make the team in training camp.

Not only is he the the eighth player in NFL to accumulate 1,000 career receptions, Ward is coming off maybe his worst NFL season since his rookie season in 1998. A reserve behind Courtney Hawkins and Charles Johnson that season, it was the only year of Ward's career he didn't start a game.

Antonio Brown began to take starts away this year from Ward, whose nine starts in 2011 were his fewest since the 1998 season. Brown and fellow wide receiver Mike Wallace would be named to the Pro Bowl this year, further pushing Ward into a role of the sage veteran who is more of a coach than player at this stage of their career.
His 46 receptions in 2011 were the fewest Ward has had since his rookie season. Burt it wasn't just a decline in production there that may have the Steelers brass undecided as to whether or not they bring him back for another year.

He was always a possession receiver whose game was more noted for leadership and a run blocking ability that was truly bone-jarring. But Ward averaged a career low 8.3 yards per reception this year, and the two touchdown receptions Ward scored were his fewest since he failed to score as a rookie.

Wanting to hang on another year is nothing new for the NFL player. There has been a ton of wide receivers who wanted to extend their careers one last season, but few who went out to the retirement pastures having left an indelible mark on those last gasps for glory.

Jerry Rice is thought of by many to be the finest wide receiver in NFL history. The Hall of Famer spent 16 years with the San Francisco 49ers, but the team decided to part ways when Rice wanted to keep playing. He joined the Oakland Raiders and remained extremely productive for three season, one of which included a Pro Bowl nod, but wanted to keep playing in 2004.

Father Time finally caught up to Rice by then, so the Raiders traded him to the Seattle Seahawks early in the season. He still tried to play in 2005, but ultimately decided to retire after realizing he would never top the depth charts of any team again.

Rice broke the all-time receptions record of fellow Hall of Famer Art Monk, who is the first NFL player to ever have over 100 receptions in a season. Monk himself extended his career perhaps too long, just as did Rice and many others.

After having spent 14 seasons with the Washington Redskins, the team decided to trim their payroll and parted ways with Monk. He joined the New York Jets for a year and was a moderately effective player, but decided to try and keep playing. Monk joined the Philadelphia Eagles for three games in 1995 before deciding to retire.

Monk wanting to keep playing the game was no different than what his mentor, Charley Taylor, did. The Hall of Famer, who left the NFL as the all-time leader in receptions, tried to play his 13th season for the Redskins in 1977.

Taylor, who had missed the entire previous season due to injury, began the season starting and eventually lost his job to Danny Buggs. He retired as a player, but soon rejoined Washington and coached the wide receivers to three Super Bowl victories.

These are just a few examples of how Ward's NFL future could play out. Few end their careers on a high note, as Wes Chandler and Max McGee did.

Chandler spent 11 years with the New Orleans Saints and San Diego Chargers, which included four Pro Bowl nods. He joined the 49ers in 1988 and played just four games, but garnered a Super Bowl ring that season before finally retiring.

McGee spent 12 seasons with the Green Bay Packers, but had just 16 receptions for 325 yards and four scores in his last two years with the Packers. Yet his nine receptions for 201 yards and three touchdowns in the postseason helped Green Bay win two consecutive Super Bowls and helped McGee retire at the top.

Whenever Ward does decide to retire, he will most likely receive a few votes for induction into the Pro Football Hall of Fame. Despite making the Pro Bowl just four times, he is the Super Bowl XL MVP and was named MVP of the team Steelers times. Ward is the Steelers all-time leader in receptions, receiving yards and touchdown catches.

Recruited by Georgia University as a quarterback, Pittsburgh had Ward throw just three passes in his career but did run the ball 57 times for 428 yards and a score. He was a precision route-runner who was the only dependable weapon Pittsburgh's passing game had for several seasons.

Yet his leadership skills was perhaps as important as his playing ability. Ward's desire to win would have fit well with the famous "Steel Curtain" defense that won four titles, and his helping the franchise win two more just helps Pittsburgh stay one of the more respected teams in the NFL.

His blocking ability allows Ward to stand out from the rest of the wide receivers in the league. Unfairly termed a dirty player by some, all Ward did was out-think opponents and put himself in the right position to make crucial blocks that also happened to break bones.

In 2008, he laid out a unsuspecting Cincinnati Bengals linebacker Keith Rivers. While not penalized for the play, the ever-softening NFL did change rules in 2009 by making it illegal a blindside block if it comes from the blocker's helmet, forearm or shoulder and lands to the head or neck area of the defender. It is called the Hines Ward Rule by many.

Whether or not Ward remains in the NFL, let alone with Pittsburgh, remains to be seen. It is obvious he is nearing the end of a fabulous career, one that can continue thanks to rules that cater to the offensive side of the football.

His wisdom, blocking ability and leadership should attain a job offer next season, but Pittsburgh may end up being forced with giving Ward's roster spot to a younger and cheaper player. It may not be what the teams wants, but the examples of Rice and Monk are proof that sometimes the bottom line of a fiscal situation outweighs the heart.

My cuzin 3rd filled in and went 4-4 in my absince. He almost called dat Patriots/ Broncos score perfectly tho. I tink I can be better dis weak.

Baltimore has never beaten the Patriots in six regular seesun games since 1996, but dey did win in New England during da 2009 playoffs. Patriots quarterback Tom Brady has four of those wins and is coming off a 2011 where he threw for career best totals in attempts, completions and passing yards.

Brady is one of just two players in NFL history to win both the league's most valuable player award and Super Bowl MVP multiple times. He is very much in the running for a third NFL MVP trophy, because the Patriots have relied on his prowess heavily all seasun.

New England's defense is nothing special, ranking 31st in yards allowed and 15th in points coughed up. Their 17th ranked rushing defense will be under the spotlight against a Ravens team that relies heavily on their ground game.

If Baltimore cannot run the ball well, da onus will bee on Ravens quarterback Joe Flacco. Flacco, whose 57.6 compleshun percentige dis yeer was da worst of his career, has won 46 of his 64 regular seesun starts. Da fourth-yeer pro has been drawing criticism recently for an inability to win big games, but da fact is dat Flacco has also won five of eight playoff games as well.


Ray Rice is the key to the Ravens offensive attack. Not only did he lead the team in rushing and receiving, but da 2,068 yards from scrimmage he had dis yeer led da NFL. Flacco has found five receivers more den 40 times dis seesun.

Baltimore has a veteran defense that is perennially amongst da best in da league. Dey ranked third in both points and yards allowed dis yeer, as well as furst on touchdown passes given up.

Baltimore has a pair of young stud tight ends in Dennis Pitta and Ed Dickson themselves. While their combined 94 receptions and eight scores may pale in comparison to the 169 catches and 24 touchdowns Gronkowski and Hernandez got, the two are none the less an effective duo.

New England lost just one home game this yeer, while all fore of da Ravens 2011 losses happened on da road. Both squads know how too win da big game and are laden wif experienced veterans.

3rdStone picked da Ravens too win it all befour dis seesun started, while I tought dey will reech da Super Bowl. Tho I tink da Pats might win dis, I decided to go wif 3rd and stick wif da Ravens.

Dis surprise matchup iz indickadiv of a NFL seesun that kinda sucked tanks too no training camp. While da Niner was expected by few two bee hear at da beginning of dis seasun, praktically no one tought da Giants wuld ger hear after losing like half of dere defensive players before dey even got on da field dis yeer.

Da Giants go as far as Eli Manning's arm takes dem. Dere team is mediocre, as dere 9-7 record shows dis yeer, but da quarterback has had his best seasun ever in 2011. He has excellent wide receivers to work wif, which helped Manning set career high marks in attempts, completions and passing yards while making his second Pro Bowl in his eight yeers.

Since da Niners wide receivers are pretty lousy, I expect even da beat up New York secondairy to play wif dem and allow da defense to concentrate on Gore and Davis. San Francisco needs Michael Crabtree to play as good as he thinks he is.

Gore will be needed to run well, because da Niners do not want two rely to much on Smith. If da Giants blitz a lot to shut down Gore and try to shake up Smith, a pretty yung San Francisco offensive line will bee put two da test.

I don't know if da Niners swipe too more balls dis Sunday, but I can sea it. New York has da edge in experience, but San Francisco holds a decisive edge at spechul teems. Gore was shut down in da first meating between da squads, so I am looking for improved production from him.


OK yous mugs, enjoy Sunday. I iz gunna catch da games at dis cuties house, where I expect us tii due our own stretching exercises at halftime. Capeesh?

Posted by 3rdStoneFromTheSun at 7:32 PM